As the impact of humans on the environment increases, it becomes paramount that as nature enthusiasts we strive to minimize our individual impact on the natural world. Here are a few guidelines for observing and collecting plant specimens.

How to make a plant press

Parts of a drying press:

A field press has these same components except, that in the interest of keeping gear at a minimum, there are up to 10 sheets of newspaper, each containing a separate specimen, between the blotters. Alternatively, while in the field, plants can be labeled with the collection # and put into heavy duty plastic bags to await pressing.

Ropes, belts, bungies or even heavy books can be used to press the specimens. Belts etc. should be pulled as tight as possible and often need to be retightened after the initial day of drying as the specimens lose moisture.

Frames are usually made of wood. Often they are latticed in the interest of minimizing weight and encouraging drying. Frames are typically 30 x 46 cm (12 x 18 in), as are the corrugates.

Ventilators are typically corrugated cardboard, although metal corrugates are also available. The corrugations should run parallel to the short end of the frame to allow for the greatest air flow.

Blotters are not always necessary but are useful if specimens are succulent or if the climate is humid and a plant dryer is not close at hand. Foam is used for specimens with thick parts to distribute the pressure evenly over the entire specimen and to ensure that thinner parts get pressed as well.

Newspapers should be cut to the same size as standard herbarium mounting paper, 29 x 41.5 cm (11.5 x 16.5 in) or smaller. Specimens too large for the paper can be folded (in a v or w). A piece of pressboard with a slit in it can be useful for keeping the bent material in place. Also, larger specimens can be divided between 2 or more sheets. In the case of very large specimens, parts such as the midstem can be omitted if they are not needed for identification. For trees and shrubs, collections should consist of flowers, fruit (if possible), terminal and lateral buds, and enough material for the branching pattern to be evident.

Remove any soil from the roots of herbaceous specimens. Thick fruits, stems, corms, bulbs etc. can be cut in half to both encourage drying and show features. Large fruit like pine cones can be dried whole and stored separately from the mounted specimen. It is very important to ensure that at least one leaf is turned over so that both the abaxial and adaxial surfaces of the leaves can be examined on the mounted specimen. It is also advisable to spread out some flowers to show the flower parts. Very small, loose or extra parts should be enclosed in a fragment folder/seed pcket.

It is important that specimens dry relatively quickly to prevent them from molding. A plant drier is the best way to dry specimens. We have a commercial one at UNB but in the field one can be made relying on the convection of hot air from light bulbs placed under the presses. Take precautions to prevent fire. Presses should be arranged so that air is moving through the long side where the ventilator openings are rather than the short side. Presses can also be put on the luggage racks of cars, in the back window, just above the pavement on a hot, dry day or near a radiator. Many specimens will be dry in 24-48 hours although some may take up to 6 days. A specimen is dry when it is no longer limp.

Aquatic plants, which are too delicate to arrange properly, can be floated directly onto a herbarium sheet or a sheet of acid free paper and arranged while they are supported by the water. If they are mucilaginous they will stick to the sheet on their own and a piece of j-cloth or wax paper should be placed over top to prevent them from sticking to the newspaper.

Succulents may have to be sliced open and even sprinkled with salt or the inner flesh removed to encourage quick drying. If this is not done some succulents may remain alive inside the drier and slowly shrivel away to practically nothing. Blotters and newspapers should also be changed frequently while drying succulents. If newspapers are to be changed, it is best to attach to the specimen a label with the plant collection number rather than writing it on the newspaper. These, of course, should be written in pencil.

In many areas of NB poison ivy is a fact of life, so here are a few pointers on identification and manaement. Poison ivy is part of the Anacardiaceae - Cashew family. Two species occur in our province Toxicodendron rydbergii (which has toothed leaflets and does not climb and thus is without aerial roots) & T. radicans (with leaflets more or less entire and often with aerial rootlets for climbing). Poison ivy is found throughout NB. 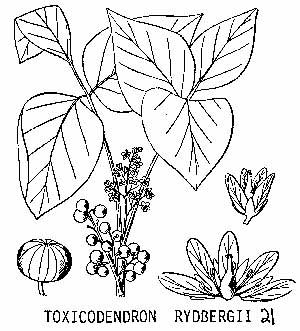 Symptoms develop 24-48 hours after contact. Not everyone is susceptible, often the more exposure you have the more susceptible you become. For a rash to develop, contact must have been made with the sap so one would think that just brushing against poison ivy would not be a problem. Very often though, sap has leaked out of the epidermis from insect punctures or wind damage and can affect unsuspecting passersby. Breathing in the smoke of burning poison ivy plants can be particularly dangerous.

Prevent exposure by knowing how to recognize poison ivy and avoiding it. Clearings and banks near waterways are especially good poison ivy habitat. Wear protective clothing and boots when entering poison ivy country. Clothing can be decontaminated by laundering well at home with soap. There is also a product on the market called IvyBlock Lotion which you can apply like sun screen to exposed body parts to block exposure. The active ingredient of poison ivy, urushiol, can stay active for years in dry situations so make sure to launder any potentially contaminated clothing.

Wash any exposed area as soon as possible with lots of water and soap. Washing with alcohol is also recommended but this removes the body's protective layer making the area particularly susceptible for the next while to further irritation. Over the counter and prescription medications are available to treat poison ivy rashes.